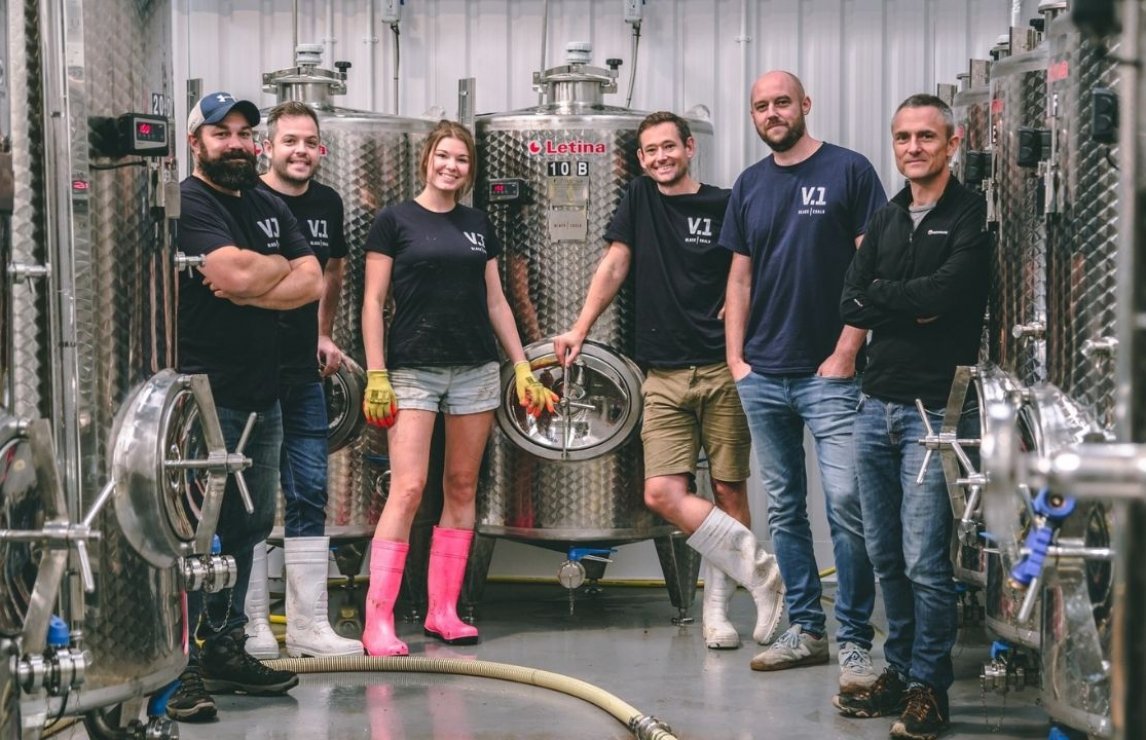 ^ The Black Chalk team, with Jacob Leadley, winemaker & CEO, third from the right

Jacob Leadley, winemaker and CEO, set up Black Chalk in 2015 with his extended family. He launched its first two wines in 2018: Black Chalk's 2015 'Classic' and 2015 'Wild Rose'. He was a winemaker at the time at Hattingley Valley and was able to make Black Chalk there under contract in his spare time. After leaving Hattingley in 2018, he spent the best part of the following year raising funds to take Black Chalk to the next stage. A £1.5 million investment was secured from private individuals, existing directors and an E.U. grant. This was ear-marked for a winery, tasting room, shop, its own vineyards and team expansion.

Black Chalk's new home was opened in 2019 and consists of a winery on four of Hampshire’s best chalkland vineyards on the Fullerton Estate in the heart of the Test Valley. The core team has grown to include a full-time sales director – Jacob's brother-in-law Andrew Seden, an assistant winemaker, a tour and sales assistant and a vineyard manager. Alongside the wines, Black Chalk has focused on building the brand by offering tours and tastings at the vineyards and winery, as well as growing cellar door sales.

The team maintained momentum this year and finished an excellent first harvest at the new winery. Black Chalk is set to expand the portfolio with the release of two new still wines: a Pinot Noir Rosé, which will be released in early 2021, and a Chardonnay. A 2020 Blanc de Blancs is also on the cards, as well as a Blanc de Noirs.

The future looks bright for Black Chalk, with an IWSC 2020 Trophy win for its Classic Brut 2016 that judges found deliciously 'expressive, savoury and citrusy.' Excitingly, it has also just won listings in Japan, which will be Black Chalk's primary export market.

We caught up with Jacob earlier this week to talk about how a trip to Central Otago in New Zealand sparked an idea that would throw him headfirst from London City life to winemaking in Hampshire.


How did you get into wine?

Although Black Chalk is still relatively new on the wine scene, for me, the decision to start making wine goes back to 2007. I had been working in the City since 2002, but it was something I had fallen into and wasn’t something I wanted to do long term. So in 2007, I decided to take a career break and travel. It was while on the New Zealand leg of the adventure that the idea first struck me, in the heart of Central Otago wine country, on the shores of Lake Wanaka. I was swept up in the romance of it all and the seed of an idea was planted.

Fast forward two years, and back to London life, the dream remained very much front of mind. During an afternoon spent sitting in a pub in Hampstead, plans formed  – not quite on the back of a cigarette packet – that I would retrain as a winemaker.  I enrolled at Plumpton College, upped sticks and left London for the South Coast in 2009. After gradutating, I did a couple of vintages – in New Zealand and Champagne – before returning to the UK. The rest, as they say, is history.


What is your winemaking philosophy?

Everything we do at Black Chalk is quality focused; we take time to ensure we get things right. Since taking on our new vineyards in January, I have spoken about growing with intent. By this I mean growing the vines with a purpose in mind and treating blocks very differently in order to maximise the potential from each one. This is a long term plan but something that is already showing results in year one. I am also a strong believer that it's the people who grow grapes and make wine. We have a strong team at Black Chalk and together we push each other to grow better fruit and make better wines. We know there are always things we could improve.

What's the best piece of advice you've been given and how did you use that in your winemaking?

I went to New Zealand in 2013 to work a vintage with Akarua. On arrival, I came across a man called Tony Jordan (someone I had met for the first time a few months earlier in the UK). The first thing he did was to include me in an entire day of intricate blending and dosage trials. Sadly, as many will know, Tony passed away suddenly last year. I can't select just one piece of advice he gave me, but I will be forever grateful for the time and knowledge he shared with me when we met – the encouragement he gave me to pursue Black Chalk was incredibly valuable.

Who or what has been your most important influence and why?

The world of wine is full of some incredible people. I think the biggest influence that has helped at every stage of my journey has to be the friends I have made along the way. They have supported me, challenged me, encouraged me, educated me and made the journey a huge amount of fun.