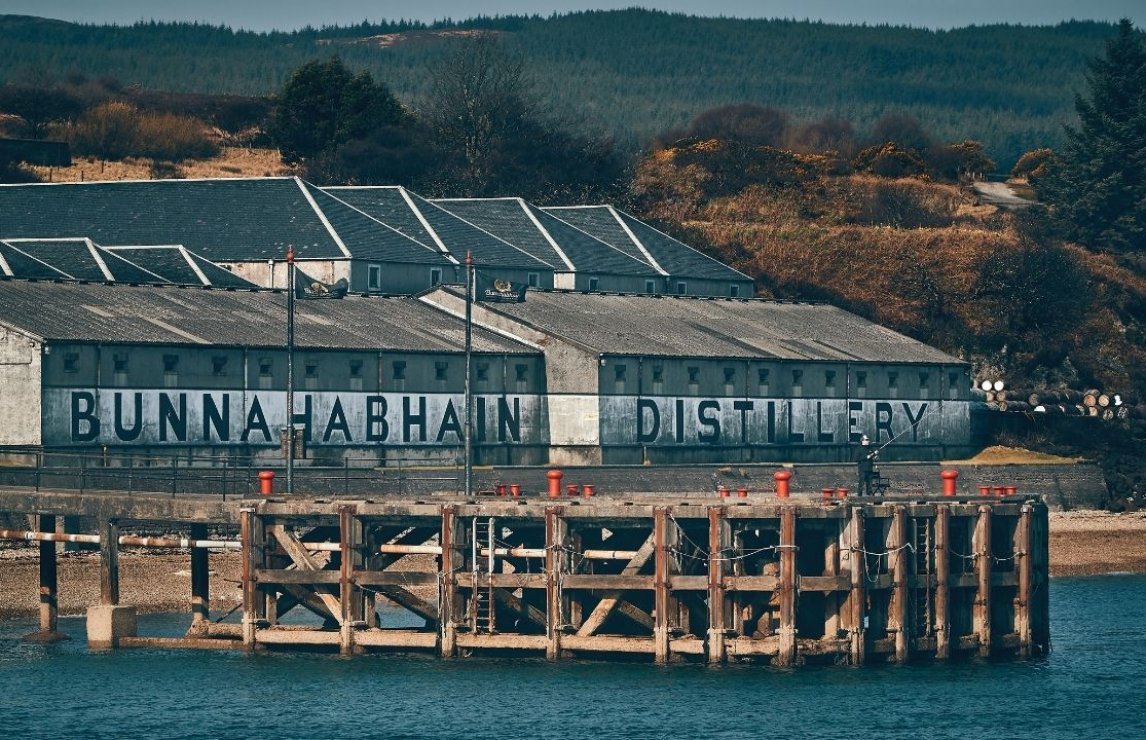 More than a century has passed since a band of explorers discovered Bunnhabhain's distillery site, nestled at the mouth of the Margadale river in the remote North Eastern tip of Islay. Its name comes from the Gaelic for 'mouth of the river', pronounced 'Bu-na-ha-venn'.

The fresh waters of the Margadale spring provide a plentiful supply of pure water which helps define Bunnahabhain’s unique character: oiliness and salty sea air. While most Islay single malts are heavily peated and smoky, Bunnahabhain is an exception as its only recently that the distillery has started to make ones that are made with lightly peated barley.

The Bunnahabhain 25 YO single malt Scotch whisky delighted IWSC judges with its 'soft vanilla sponge, orange liqueur and grapefruit zest aromas'. The 25 years spent gently maturing in ex-sherry casks has given this complex spirit 'elegance and finesse' – it was awarded a trophy and a fantastic 98 points.

Earlier this week we spoke to Andrew Brown, Bunnahabhain's distillery manager about this stunning single malt that would make a very special winter dram.

What is your background as a distiller? What defines your approach - what is the most important part of your philosophy of distilling?

I started in the warehouse 32 years ago and have worked in every single one of the distillery’s production roles, learning from the ground up. This has shaped my approach to distilling: seeing the distillery from every perspective and watching it evolve over time. It has led me to believe that we should be producing a consistent spirit quality, without variation, year upon year. Consistency in the spirit is at the centre of everything.

Who or what has been your most important influence?

The people I learned from have been the most important influences, whether that was how to safely roll a cask in the warehouse, how to mash the spirit, or what to look for when it comes to running the stills themselves. I’ve also picked up how to manage a distillery; it's is a complex operation which requires constant attention. Various people have moulded me into the manager I am today and each has been as important as the other. It has been a journey and one where I learn something new every day.

It's a great whisky with beautiful packaging and will add to any bar. Having been fully matured in ex-sherry casks, it yields a rich, sweet burst of caramel and berries. And with more than two decades of slumber by the sea, this exquisite Bunnahabhain is saturated with the delicious salty sea air influence for which the distillery is renowned.

What makes this whisky so special?

To me, it is something that I have had a hand in shaping. It has been a part of the majority of my career at the distillery, maturing while my career has grown. I probably mashed and then stilled and possibly even filled it to cask before stowing it safely and securely in our warehouses by the sea where we carefully check on it while it slumbers away. It has developed so much across a quarter of a century, and as Bunnahabhain’s oldest expression, it's a whisky that fans definitely don’t want to miss.

Bunnhabhain 25 YO single malt whisky is available to buy from Whisky Exchange.