IWSC Judging: behind the scenes 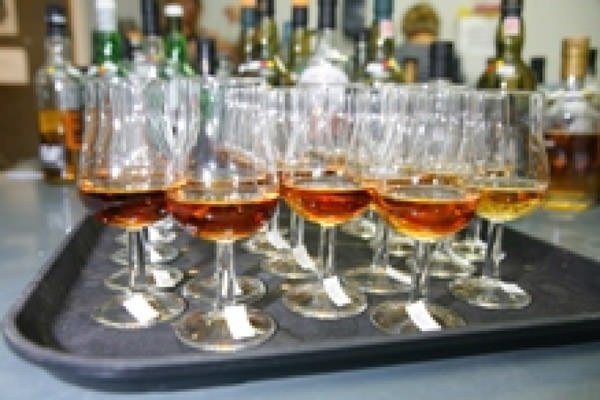 June 14th was a date I'd been looking forward to in my diary for quite some time. My debut judging with the International Wine & Spirit Competition (IWSC) was doubly exciting for the fact it was for the Tequila category, a long standing favourite of mine.
Upon arrival my first impression was, to be honest, that I must've taken a wrong turn. The venue looked more like the place they shoot Top Gear than somewhere you would expect to taste world-class flights of spirits.*
It turned out I was in exactly the right place, easily identified by the group of people outside the front door excitedly discussing agave spirit (which would have been a heck of a coincidence otherwise). Tasting at the IWSC is all about business.
Now I've been to my fair share of tastings - some would say more than my fair share - and all have had one thing in common: industry gossip. Small-talk and networking often plays as much a part of the day as actual tasting. But not with the IWSC, oh no. Given that the ever present 'no smoking' signs in this office also dictate 'no aftershave' and 'no perfume', this should have come as no surprise. Tasting is not simply an event here, it's a profession.
With a minimum of fuss, some very brief introductions were made, and it was on with the first flight. I'm not sure how much I'm allowed to tell you about the tasting itself. I do know that all results are held in the strictest of confidence until they are publicly announced, so I shall err on the side of caution and not reveal too much.
Some features were definitely notable, and I'm sure (or at least quietly confident) that I won't get in trouble for revealing them. Firstly, the speed of tasting was quite breathtaking. This is fast, accurate tasting at its best. Certainly, there was time for reflection between flights but, with some flights taking in a dozen tequilas at a time,this was a genuine test of my palate.
Secondly, the level of expertise in the room was truly humbling. It's not often I say that kind of thing, and I certainly don't use the phrase lightly. Well over a century of expertise combined to make that panel. With that level of knowledge gathered together, you might well expect a few disagreements to occur. And you'd be right. Which brings me to my next point: the level of respect each judge showed for their contemporaries opinions was impeccable. It's almost disappointing that I found this surprising, but sad to say there are many out there who consider themselves 'expert' who still fail to recognise that taste is above all else a subjective experience.
Last but not least, the integrity of the tasting shone through when, even after the judging was complete, there was not a single mention nor glimpse of any of the brands involved. Even as I write this, I have no idea which brands we assessed. Given the proliferation of social media etc. (case in point: you're reading this), this is clearly a wise move.
Respect is certainly due to the IWSC. A truly professional operation from beginning to end. And I'm very pleased to say I've been invited back for next year. I'm already looking forward to it.
*Apparently, you really should trust your first impressions. I found out as I left that they literally do film Top Gear there!
Source: http://www.willlowe.com/2011/06/iwsc-judging-behind-scenes.html
You can read more of Will Lowe's wine, spirits and cocktail reviews on his website - www.willlowe.com
You can also find him on twitter @will_lowe