IWSC Market Insight: A deep dive into the ‘nolo’ category 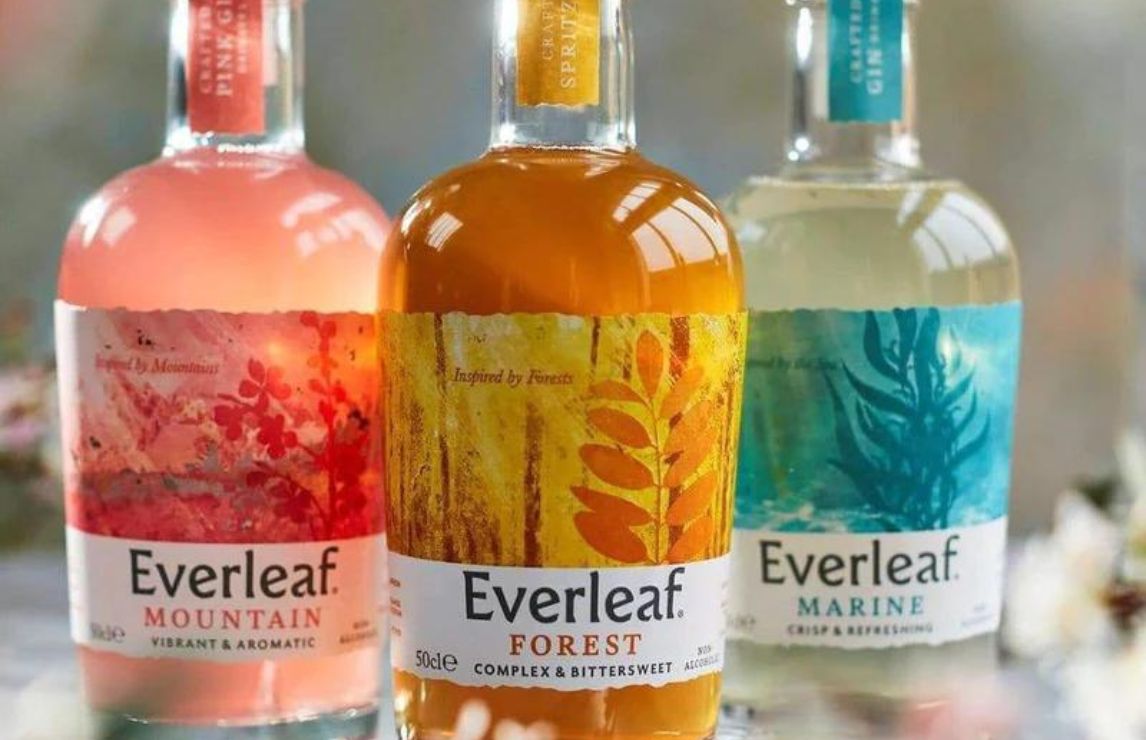 The ‘nolo’ sector has come a long way since Ben Branson launched Seedlip in 2015, including the launch of brands like Everleaf.

The ‘nolo’ sector has come a long way since Ben Branson launched Seedlip in 2015. Lucy Shaw takes a deep dive into the category to sniff out the latest trends, see where it’s headed, and find out whether functionality will be key to its continued success.

If you need proof that the ‘nolo’ movement has gone mainstream then look no further than Kylie Minogue. In October the pop princess added an alcohol-free sparkling rosé to her hugely successful eponymous wine brand, which has sold over a million bottles since it launched in 2020, and is now worth a cool £18.9m. On sale at 700 Tesco stores across the UK, the £7 fizz is made from a blend of European grapes and organic tea from China’s Yunan province, and is being targeted at sparkling rosé fans seeking a clean, textured sip minus the alcohol. The fact that Kylie’s collaborator, Benchmark Drinks, chose to launch an alcohol-free expression is telling – the brand goes where the growth is, and the launch indicates that the nolo sector is on the cusp of seismic change.
“It’s definitely a global movement now, as the attitude towards alcohol is shifting globally. It’s no longer just a Western world phenomenon,” says Laura Willoughby MBE, founder of mindful drinking platform Club Soda. “The category is at an interesting tipping point – it’s big in Japan, the US is about to take off and the movement is starting to grow outside cities in the UK. There’s still a long way to go, but awareness of the nolo sector is high now.” According to a 2022 IWSR study, the nolo category has a global retail sales value of just under US$10 billion, with Germany currently leading the charge on 110m 9-litre case sales a year, followed by Japan on 33 million cases. On a global scale, the ISWR forecasts the sector to have a volume CAGR of 7% between 2021 and 2026. Growth in the UK looks set to be even more impressive, at 30% over the same period.

Things have come a long way since entrepreneur Ben Branson launched Seedlip at Selfridges in 2015, pricing his non-alcoholic ‘spirit’ boldly at £29.99 a bottle. Since then big brands like Gordon’s and Tanqueray have entered the game with zero proof offerings, helping to take alcohol-free ‘spirits’ more mainstream. New booze-free brands are entering the space at a rapid rate, leading to a 225% uptick in nolo entries at the 2022 IWSC awards compared to 2021. Club Soda was founded the same year as Seedlip, and Willoughby has seen the nolo category evolve dramatically over the last seven years. “The growth has been amazing. Almost nothing existed in the space when we started out. We did our first event in 2017 and scraped together 20 brands, while this year we had 110 brands on sale at our pop-up shop in Great Portland Street, which is only a fraction of the market. Seedlip broke the mould then others came in thick and fast,” she says.
In tandem with the growth of the category has been a shift in consumer drinking habits, with mental health now the number one driver for cutting back on booze. Rather than targeting teetotallers, Willoughby believes nolo brands should be speaking to everyone, as the category is seeing the biggest growth from drinkers seeking to reduce their alcohol intake by occasionally going alcohol-free – over 80% of consumers who have dabbled in the nolo category drink alcohol. With increased investment in the alcohol-free sphere, exciting new brands are entering the market, while established names are growing their offerings. Trailblazing sparkling tea brand REAL recently opened the UK’s first standalone alcohol-free fermentation facility at Waddesdon Estate in Buckinghamshire to grow its range, which is currently on pour at a number of Michelin-starred restaurants, including The Fat Duck and Le Gavroche. The nolo offering in the UK has vastly improved in recent years, as brands learn their craft and hone their recipes, prioritising quality and provenance to help deliver on flavour. “Some of the first generation alcohol-free gins and rums were overly sweet, but now we’re seeing brands like Three Spirit and Sentia emerge that have more depth of flavour and a better mouthfeel,” says Vaughn Yates, founder of The Virgin Mary Bar in Dublin, who has recently opened sister sites in Dubai and Abu Dhabi.

Yates believes the next big trend within the nolo sphere is functional drinks, and has dedicated his latest menu to mood-boosting sips. “Functional drinks can help us drive the night-time economy and create a different one. I firmly believe it’s the future of where drinking will go,” he says. At the forefront of the trend is Sentia, which bills itself as ‘the world’s first gaba spirit’. The brainchild of professor David Nutt, Sentia’s plant-based ingredients activate gaba neurotransmitters that have a calming effect on the body, similar to alcohol. The goal is to create the relaxed buzz you get from alcohol without the hangover. Another player in the field is Three Spirit, co-founded by Tatiana Mercer, which leans heavily on drinking occasions. “People drink for feeling and flavour and you have to deliver on both. We developed our range with bartenders and plant scientists with flavour and function in mind – our Livener is a pick me up, while our Nightcap helps you relax. I like the fact that people can match their drink to a specific moment in the day, as the brand becomes part of the ritual,” says Mercer.
The explosion of the health and wellness movement has blown the door wide open for the nolo sector to profit from it. Consumers are becoming increasingly savvy when it comes to alcohol-free drinks, and are seeking more than great flavour – they want function too. “People are trying to optimise all areas of their lives now; it’s no longer just about morning vitamins and a cup of chamomile before bed,” says Anne Brooks, founder of nolo newcomer Eceaux Drinks. “Functional AF drinks could emerge as a distinct category, but they need to feel like a treat, as people are seeking escapism and indulgence at the moment.” Pauline Idogho, founder of RTD brand Mocktail Club, agrees: “There’s an interesting intersection between the nolo space and health and wellness. The future for the movement lies in targeting people who are moderating their drinking and are seeking out drinks that boost their physical and mental health. Taste and occasion will always be the driver though. If it doesn’t taste good then it becomes like medicine, and no one wants that,” she says.

Having initially focused on the absence of alcohol, the nolo sector has evolved and the focus has shifted to the functional benefits and what the drinks bring to the party. The importance of ritual can’t be forgotten within the conversation –human beings want to connect and belong, so AF drinks need to be able to tap into the rituality of socialising, and offer those who order them a sophisticated experience that doesn’t compromise on flavour or enjoyment. “When people buy a drink they’re buying the effect of the alcohol, so nolo drinkers are looking for something that replicates that taste and feeling and gives them a natural lift,” says Willoughby. “Presentation is also hugely important, as it’s all about the experience. It’s great to see mixologists taking real pride over their alcohol-free cocktails, as it’s a good motivator for change. Retaining the ritual around these serves is incredibly important, as people who happen not to be drinking don’t want to feel different and ‘othered’. Coke from a hose won’t cut it anymore.”
While the nolo category has come a long way in a short space of time, the sector sill only accounts for a fraction of the total global drinks market, so its growth potential is huge. “Awareness is high but adoption lags behind as the concept is still new to a lot of people. Specialist retailers are popping up all over the world now, as are alcohol-free bars, so the category is evolving,” says Willoughby. As consumers re-evaluate their relationship with alcohol, and the stigma disappears around taking a more flexible approach to drinking – in the same way it has eating meat – what was once a niche eccentricity looks set to become one of the most dynamic and important categories within the drinks industry.