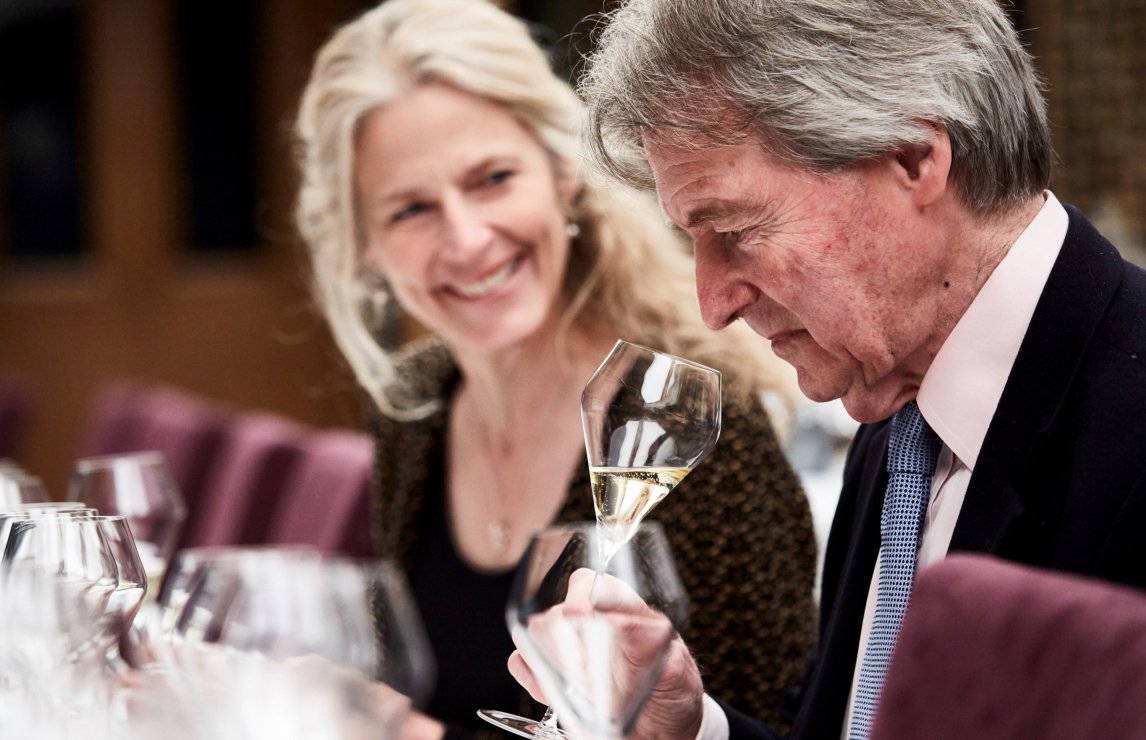 Steven Spurrier (pictured above with Nancy Gilchrist MW) is one of the most renowned figures in the wine world. As a merchant in Paris he was catapulted to fame after his 1976 tasting that came quickly to be known as the Judgement of Paris. Many books have been written on the subject, along with one notorious film, 2008’s Bottle Shock, in which Spurrier was played by the late Alan Rickman. But the Paris tasting was just the beginning of a five-decade career which has seen him move from Paris to New York and back to London, encompasses over 300 columns for Decanter magazine, many consultancies including a decades-long stint with Singapore Airlines, and the founding of Bride Valley Vineyard at his home in Dorset on the south coast of England. There he produces a critically-acclaimed English sparkling – and lately a fine still Pinot Noir and Chardonnay.

Now approaching 80, Spurrier is as active as ever. Not only has he just joined IWSC as Honorary Chair, he is also deeply involved as consultant with the Académie du Vin Library, the publishing house that has grown out of L’Académie du Vin, the wine school he founded in 1973. The house is dedicated to publishing the very best wine writing “from the past, the present and the future”.

At the same time he is building a sculpture garden at his 18th century manor house, which will show off a collection of bronzes and other works to which he is still adding.

The final chapter in Spurrier’s recent memoir Wine – A Way of Life deals with Bride Valley and is entitled “Poacher turned gamekeeper”. There’s a definite sense that the hard-partying young man about town of 1960s London is beginning to think about a more contemplative existence, if not yet retirement. He has his vineyard, his art collection, a publishing venture, and a new association with the IWSC. “It’s a fitting occupation for a gentleman,” he says with a smile.

I was brought up in Derbyshire, moved to London, then to France, then back to London and later to Dorset, remaining a totally English European.

At Christopher and Co, whose head office was in Jermyn Street, making them one of the Big Three with J&B and BBR. They didn’t survive, but the year of training in the cellars was handy, and the six months spent abroad with their top suppliers was memorable.

What inspired you to join the wine industry?

A glass of 1908 Cockburn's on Christmas Eve 1954 in the family house in Derbyshire, inspired by my grandfather. 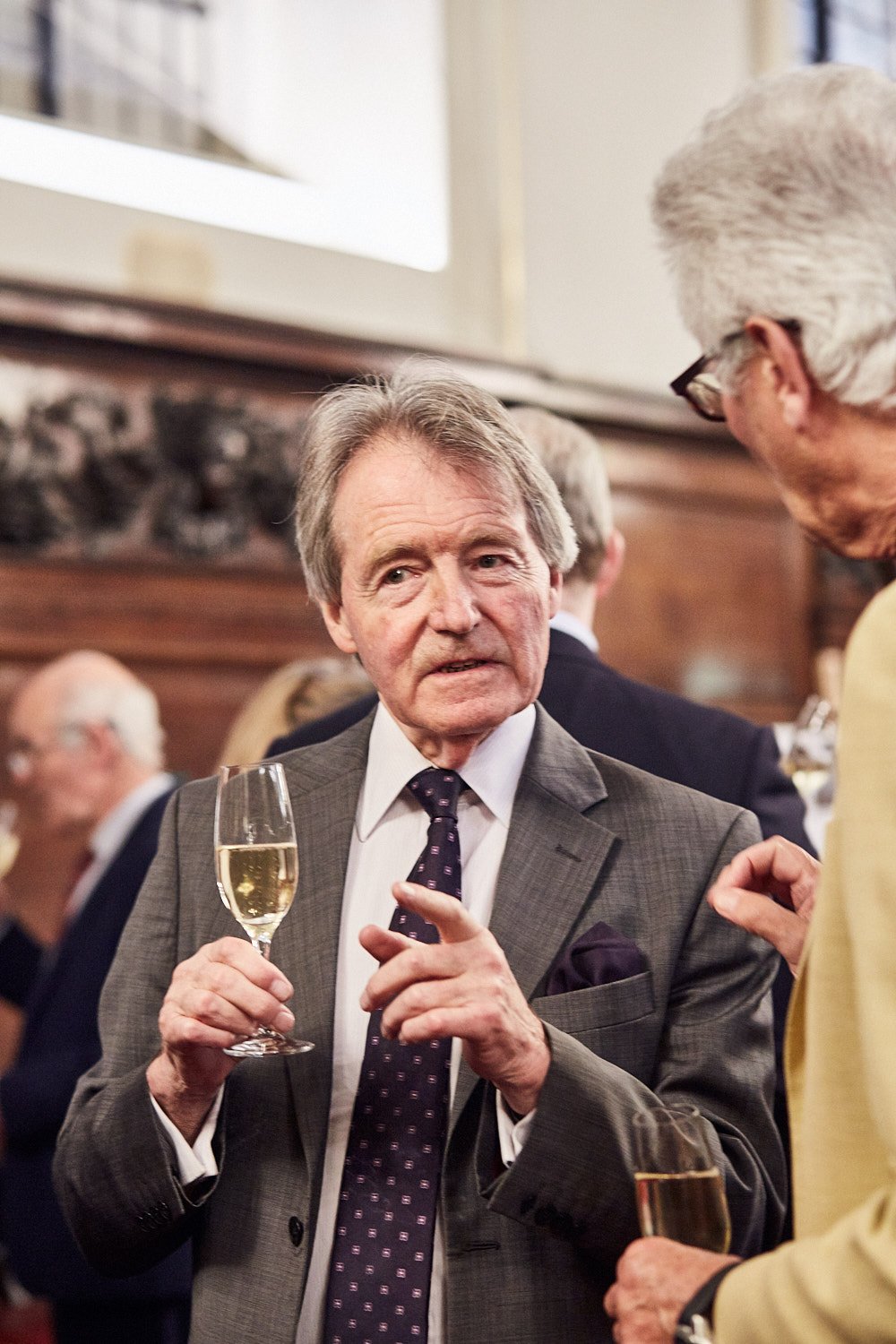 Getting back into the London wine trade after the collapse of my Paris businesses in 1990. I had been out of the UK trade for over two decades and although I had written some well-received books, I was broke and had to start all over again. A six month stint running the Harrods wine department worked wonders and although I feel I did more for Harrods than it did for me, it put me back into circulation.

Without a doubt the creation, in 1973, of L’Académie du Vin, the first private wine school in France. While the tasting that became known as The Judgement of Paris made me (justifiably) famous, this was the brainchild of L’Académie du Vin. Its influence is still on-going with the creation of the Académie du Vin Library, a series of books on all aspects of the wine world which are bringing back the “literature” of wine.

Is there anything that you would consider a failure in your career?

Too many to list – huge financial losses due to not paying attention to the reality of the ventures I was getting into. Hopefully these are in the past.

What advice do you have for someone joining the wine industry?

The wine business is above all a people business. The vineyards produce the grapes, but people have to discover (and re-discover) the vineyards, make the wine and sell it. The trade has to buy it and then, in turn, sell it on. There are very few poor wines today, so many pitfalls can be avoided, but the people are still key to everything. I am convinced that the sociability and sharing, the overall respect for and generosity to each other is the wine trade’s unique characteristic. This more than makes up for all the work.

What advice do you have for a producer wanting to get their wine in front of you?

To tell the story honestly – the whys and the wherefores – and the wine has to illustrate this in a recognisable way.

The same question is asked about talent and ambition. Talent without ambition won’t get very far, nor will ambition without talent. In the wine trade, knowledge is the key, for wine is a very complicated product and people have to be told all the time why they should drink it. When you are talking about wine, at any level, passion is a huge advantage and very attractive, while passion without knowledge is impressive but meaningless. For the IWSC, wines and spirits should be judged with knowledge, then the medal winners talked about with passion.